Watchmen by Moore and Lindelof 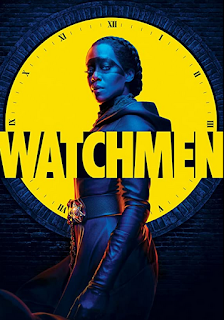 Thanks to an absolutely bullseye Christmas present from a friend (a Blu-ray box set; I'm old school) I have caught up with one of the cutting edge television series of recent times.

Watchmen is of course based on the ground-breaking graphic novel written by Alan Moore and illustrated by Dave Gibbons. Published in 1987, Moore's Watchmen remains perhaps the greatest graphic novel of them all.

And now along comes a TV adaptation which, on the basis of the first three episodes, is actually worthy of it.

The television Watchmen begins unforgettably in Oklahoma in the 1920s where black city dwellers are being systematically murdered by the KKK — they are even being bombed from the air.

I was stunned by this depiction of the Tulsa Massacre, even when I thought it had merely been invented by the writers and was alternate-universe history. But, terribly, it really happened.

The writer behind the TV incarnation of Watchmen is Damon Lindelof. Lindelof's previous credits include Lost, Prometheus (the crappy Alien sequel) and Cowboys and Aliens. Which in my mind constitute three substantial strikes against him.

However, he was also involved in writing World War Z, which I liked a lot.

And there is no question that his adaptation of Watchmen is a work of genius.

For a start, it is not a straight adaptation.

There are some hints and reference points for the viewers to relate it to the comics — like the Rorschach masks which have now been adopted by white supremacist terror groups — but otherwise we're in unknown territory.

It gradually emerges that we are indeed in the world of the Watchmen, but some 40 years on from the time of the comics. Its a rich, complex and violent world.

And some of the dialogue is eerily, accidentally prophetic: "Masks save lives." "The president can pardon anyone he wants."

But the president is apparently Robert Redford and we are in a liberalised America (a conservative's nightmare) where cops have to obtain permission from headquarters before they can unlock their firearms.

And even though this makes for an incredibly harrowing and suspenseful sequence in the first episode, it still seems like a pretty good idea — compared to the current situation.

Like the unfortunate policeman waiting for his gun to unlock, the main character in Watchmen is also a Tulsa cop, Angela Abar, played by Regina King.

And Don Johnson, who was so great in Dead Bang, is also a strong presence here as Judd Crawford, Angela's boss.

The cops are wearing masks, and so are some costumed heroes — and costumed villains — and Dr Manhattan is on Mars, where he ended up in the comics, having forsaken mankind.

So far, Watchmen is mind-blowingingly good. My only gripe is a failing that isn't even the fault of the people making the show.

Dave Gibbons gets a credit for co-creating the comic. But Alan Moore is not mentioned anywhere. I was fully expecting this, but it still makes me a little angry...

It's a long story, but basically Moore was once intimidated by some lawyers in Hollywood and he found the experience so unpleasant that he foreswore all the screen rights in all of his creations.

He gets no money and no credit when they are turned into TV shows or movies. Both of these things are insane, but the no credit is the most insane.

Let's be clear about this, Watchmen the TV show, for all its audacious originality, is still the fruit of the tree that Alan Moore planted.

And in its use of little known but savagely apt historical events it evokes Moore, in all his wide ranging erudition and his genius story construction.

But his absence from the credits fosters the destructive myth that the writer is irrelevant in comics. I am not denigrating the role of the illustrator here.

On the contrary, Dave Gibbons is a uniquely gifted draftsman.

But the fact remains that without him Watchmen would have had a different appearance, but it still would have been Watchmen.

Without Alan Moore there would be nothing.

If you want to know more about this mad situation, no money and no credit for Alan Moore — which is entirely of Moore's own making — Neil Gaiman describes it here.

Gaiman recounts how Moore did it "because he was deeply hurt and offended and irritated by being accused in the Larry Cohen lawsuit of having written League of Extraordinary Gentlemen as some kind of studio shill, and because Alan never does anything by halves.

Okay, enough about that. I've made my point.

Now, back to watching the Watchmen.

I will report further soon.