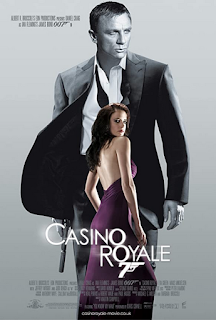 I saw Casino Royale, the first Daniel Craig Bond, when it came out in 2006.

I remembered it as a terrific movie.

And I was right. Watching it again for our podcast, I confirmed that it is indeed a terrific movie.

But only after Vesper Lynd (Eva Green) sits down with Bond on a fast moving train...

What I'd forgotten was that for a good hour or so before that, Casino Royale is so dull that it makes me want to pack in watching it and go and do something else.

It suffers from that familiar, pointless, action film dullness that comes from scenes stuffed with fast moving, violent incident which fails to engage the viewer.

It doesn't engage because we don't yet care about the characters and we aren't hooked by a strong story — in Bond movies the stories are seldom strong, in any case.

Daniel Craig does his best, and he makes a great 007. Certainly the best since Sean Connery.

But he's up against a vast avalanche of perfunctory mayhem (though I did quite like the scene with the cobra and the mongoose) in which he inflicts untold harm on innocent bystanders as much as the villains.

All this culminating in an ill judged sequence where he pursues a bomb maker into an African embassy in Madagascar.

Seeing an Aryan hunk of a superhero smash his way through a series of African bad guys made for some uncomfortable viewing.

Admittedly, prior to all this there is a cool little introductory section (shot in black and white) summarising Bond's origin story as an assassin, with some excellent elliptical dialogue about how you become hardened to killing.

But Daniel Craig'a abilities as a leading man — as Bond — only really begin to get traction once he's paired off with the mockingly enticing Eva Green on that aforementioned fast moving train.

In this respect Casino Royale is very similar to View to a Kill, which also had a tedious and dispensable opening section. And  which also only really got started when 007 was paired off with the main Bond girl. In that case Roger Moore with the engaging Tanya Roberts playing a feisty seismologist.

Anyway, Casino Royale is great once Eva Green is on board ("I'm the money") and we're in the section of the movie that bears some resemblance to Ian Fleming's original, though relocated from the Riviera to Montenegro.

The movie still departs wildly from Fleming, of course. But from this point on it is firm, assured and entertaining and culminates in a great sequence in a sinking house in Venice.

The movie is directed by Martin Campbell (Goldeneye, Reilly Ace of Spies, Edge of Darkness).

Judi Dench is very sensibly retained as M, and the script is by Robert Wade & Neal Purivs and Paul Haggis (a Canadian writer who won an Oscar for Million Dollar Baby).

The villain is Mads Mikkelsen whom I think is a terrific actor but who is wasted here .

So a shaky start, but Casino Royale ushers in a splendid new era for the Bond movies.