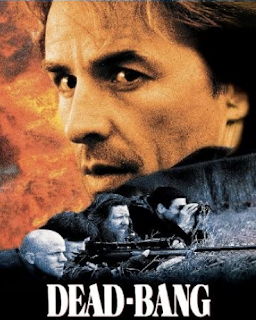 I was recently rivetted by an outstanding BBC radio documentary about the 1995 Oklahoma bombing, the worst domestic terrorist incident in American history.

It got me thinking about this brilliant movie by John Frankenheimer which I had seen many years earlier.

It's a first rate thriller about a Los Angeles detective whose investigation into the murder of a cop leads him into the murky and murderous world of neo-Nazis and fascists who want to keep America "white and pure."

I tracked down a copy on DVD — it's out of print and not so easy to find — and watched it again.

And I'm delighted to say that Dead Bang is even better than I remembered. I loved it.

It tells the story of Jerry Beck, played by a compelling Don Johnson, interweaving his chaotic and fractured personal life with his terrifying and thrilling investigation of a lethal conspiracy.

The movie features a taut, efficient and character-rich script by Robert Foster, who has a long pedigree in television stretching back to Run for Your Life in 1967.

The beautiful, fluid camerawork is by Gerry Fisher, a masterful British cinematographer.

And the magnificent production design is by another Brit, Ken Adam, whose credits include numerous Bond movies and Kubrick's Dr Strangelove and Barry Lyndon. Adam's Nazi stronghold in Dead Bang is particularly notable.

The highly effective music is by Gary Chang and Michael Kamen.

And presiding over all this talent is John Frankenheimer, one of the truly great American film directors (The Manchurian Candidate, The Train, Seconds, The French Connection II, to name a few of his achievements). 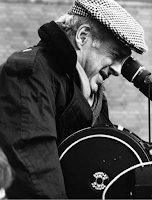 All well and good, but when I began researching this post I experienced some profound surprises.

The first is that Beck is a real person and the movie was based on his actual experiences.

Frankenheimer says, "Jerry Beck, a homicide detective in the Sherrif's Department here in LA... told me the story more or less as it appears on the screen." 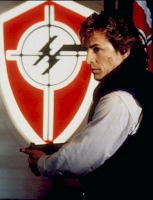 How chilling. What's even more chilling is that, while I thought Dead Bang had been inspired by incidents like the Oklahoma bombing or the sieges at Ruby Ridge (1992) and Waco (1993), it was actually made in 1988 and decisively pre-dates any of them.

Dead Bang is an important movie. It was extraordinarily prescient.

It is also gripping, exciting, funny, scary and beautifully made, moving swiftly from Los Angeles to Arizona, Colorado and Oklahoma, where the well turned out wife (Evans Evans) of a Nazi Reverend (Michael Higgins) serves the police hot apple turnovers...

(All three of the locations outside LA were actually shot in Alberta in western Canada, in Calgary, Drumheller and High River, since you ask...)

I can't recommend Dead Bang highly enough, especially given recent events. Do please see if you can find a copy and watch it.

"I had a good story to tell and it was a well-made movie. Foster, who comes from television, brought the various elements together convincingly. He's a good writer and Jerry Beck is a concerned and colourful character.

"Ken Adam's production design was remarkable. Gerry Fisher's work was, as usual, excellent, and there were great moments in it. But most importantly the story was topical, urgent and true, in depicting this attempt by the extreme right wing to unite neo-Nazi groups into a dangerous fascist force within the US... This is a real danger both frightening and real. It frightens me."

(All quotes are from Gerald Pratley's indispensable book on Frankenheimer.)

(Image credits: all from IMDB.)