The Undercarriage of the F22

I recently had lunch with a friend. 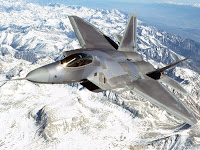 He paid, which was nice.

What was even nicer was that he had read my spy thriller Operation Herod.

“There is just one problem with it,” he said tactfully. “That jet fighter that you mentioned? It could never be used on an aircraft carrier. You see, it’s an F22.”

I said this was fascinating, and useful. I also observed that he’d had a copy of the manuscript for three years, and it would have been even more fascinating and useful if he could have pointed out this solecism before publication.

But what the heck.

My friend went on, “All US carriers currently fly the F18, in the future theirs — and ours — will fly the F35, but the F22 will never be carrier-compatible.”

Apparently there were all kinds of problems with the sexy fighter jet I had chosen for my sexy CIA operative and former Marine pilot Minerva Caine to fly on a mission with Rupert Hood.

Although I had correctly given the jet an arresting hook, which it would need for an aircraft carrier landing, this was not sufficient to make it carrier compatible.

F22s do have such hooks, but they are only used on land airstrips, in emergencies, to stop the planes at the end of the runway. The F22 doesn’t have the heavier structure undercarriage needed to survive the stresses of a carrier landing.

There are all sorts of other problems with adapting a jet for carrier work. The engine intakes have to be customized to avoid corrosion damage from salt water, for instance.

I know all that now, thanks to my friend. “I am sorry to be so irritatingly pedantic about aircraft carriers,” he said. “I hope you’re not annoyed by the correction.” 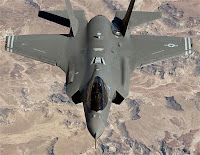 While I wouldn’t dare to compare myself to the great Ian Fleming (I could never smoke all those cigarettes, for a start), this episode nonetheless gave me a little thrill because it reminded me so clearly of Fleming being taken to task by weapons expert Geoffrey Boothroyd for giving Bond the wrong kind of gun.

If anybody else spots factual errors in the Rupert Hood books (or indeed in today's blog post), please get in touch and I’ll try and correct them in later editions.

Meanwhile, enjoy the pictures of the F22 (from Defense Industry Daily), the F18 (Wikipedia) and the F35 (The World of Aeronautics blog).
Posted by Andrew Cartmel at 11:20 2 comments: