More on the Watchmen by Lindeloff and Moore 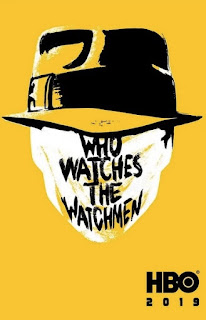 Okay, so I've now finished watching the Watchmen, so to speak, and it didn't disappoint. Except in one regard — it was only nine episodes long.

(Actually the friend who gave me the Blu-ray for Christmas had told me eight, so the discovery of an 'extra' episode was cause for considerable rejoicing.)

In my previous post on this mini series (all too mini), I discussed how Alan Moore's genius graphic novel had become a television classic by Damon Lindeloff.

Of course, I am oversimplifying the authorship here. Alan Moore collaborated with the illustrator Dave Gibbons and Damon Lindeloff worked with a whole roster of talented writers and directors...

But essentially Moore's creation has been artfully reinvented for television by Lindeloff.

And I do mean reinvented. We are some 40 years in the future of the graphic novel's setting, and approaching events from a black American point of view, with the Tulsa race riots as the point of entry.

In fact that city looms large in this tale, which has a wonderful circularity to it, beginning and ending in the same downtown theatre in Tulsa.

The theatre's called the Dreamland. Which allows for a gag at the end, after a lot of things blow up, when most of the letters of DREAMLAND have dropped away, just leaving "DR M"...

Yes, it's a Doctor Manhattan gag...

Which is kind of hilarious. Because, as I mentioned in my last post, Damon Lindeloff was involved in the scripts for Prometheus, Cowboys and Aliens, and Lost — all of which I regard as being among the worst plotted and weakly constructed things I've ever seen.

But Watchmen is brilliantly constructed and the plot has the coiled, curling ruthless power of a boa constrictor. 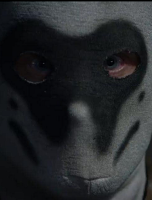 There are some flaws. No one who is really science fiction literate would have allowed the dumb time travel paradox sub plot, for example. And there really is no need for explanatory flashbacks of things that were perfectly obvious.

And Dr Manhattan's life-changing passion for Angela Abar is never motivated or justified. Just presented as an arbitrary fact...

Because the television Watchmen is also a new take in being so strongly from a female perspective.

Just one more reason it's breathtakingly good and represents a wild departure from the detail of Alan Moore's original, while being remarkably true to the spirit of it.

A seriously impressive achievement. A pity it's only nine episodes... But it could have been only eight.