52 Pick Up by Frankenheimer, Steppling and Leonard 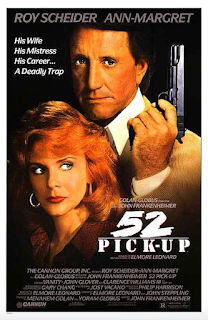 52 Pick Up is a terrific novel. (I wrote about it here.) And the film, while not in the same league as Dead Bang, is also rather terrific.

Chiefly because it tries hard to be faithful to Elmore Leonard's book — and it succeeds.

It shares the same emphasis on offbeat characters, and is faithful to much of Leonard's original dialogue — "his dialogue is laconic with a mordant wit," as Frankenheimer rightly notes.

This was not the situation with the script that the director first received. It was by "a young Los Angeles dramatist, John Steppling... Steppling did an inadequate job. He contributed nothing and he took away a lot of Elmore Leonard."

(In fairness to John Steppling, he would later go on to script the memorable prison drama Animal Factory.)

52 Pick Up is the story of a wealthy, happily married businessman Mitch (Roy Scheider) who becomes the victim of a blackmail plot.

But Mitch isn't so happily married that he isn't involved in an affair with the beautiful young Cini (Kelly Preston)...

And he isn't so wealthy that he can afford to give in to the blackmailers' exorbitant demands.

But Mitch also isn't inclined to give in. As the bad guys find out, they've chosen the wrong guy to lean on. 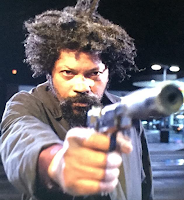 But what bad guys they are — an unforgettable trio lifted straight from Leonard's novel. "Nobody does villains better than Elmore Leonard," says Frankenheimer,

How true. The villains here are Clarence Williams III as Bobby Shy, a gunman who in the novel amusingly and knowingly evokes the outlaws of the Old West.

Here he seems more like he's sauntered in from a blaxploitation movie, but is equally splendid, a sardonic, charismatic, murderously laidback presence.

And, perhaps best of all in a very fine trio, John Glover as Alan Raimy — called Raimi in the book, and described as a "hip creepy guy" with "a weird fucking mind."

Glover is the perfect personification of Alan and is one of the most memorable things about the movie.

And then there is Vanity (a singer and protégé of Prince) who makes an indelible impression as Bobby's affably corrupt girlfriend Doreen.

These guys — and girls — are all vivid and distinctive, because they're gifted actors and their characters are taken straight out of Leonard's novel.

But the movie also inherits some problems from the book.

Let's set aside the overblown (no pun intended) climax in both novel and film, where Mitch solves his problems with explosives.

We're setting it aside because I don't have a better suggestion for the ending...

Where I do see clear room for improvement is in the treatment of Cini. In the book she is entirely an offstage character.

Very sensibly, in the movie we get to see her, albeit briefly. But this just intensifies the problem of both novel and film.

You see, when Mitch refuses to pay blackmail for having an affair with Cini our three, deeply evil, bad guys kill her and threaten to frame Mitch for her murder, unless he coughs up.

For the rest of the film (and novel), Mitch does a fine job of not coughing up.

Unfortunately, he also seems to do a fine job of not giving a damn about Cini's death; and he was supposed to be in love with her.

And, especially in the film,the death of this lovely young woman sits too heavily on our emotions to let us fully enjoy the dark, violent crime comedy that unfolds... 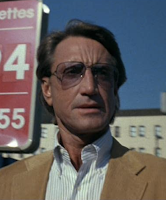 Very much to his credit, Frankenheimer was keenly aware of this.

"I had only one problem on the whole picture — to show Roy Scheider's emtional breakdown... after watching the execution of his girlfriend."

And Frankenheimer had an excellent idea of how to solve this problem. But it involved a scene what would have cost an additional $75,000. So they went for a cheaper version of that scene, which simply doesn't work.*

But it would be misleading of me to dwell on the imperfections of this film. When it hits its stride, it's exhilaratingly good.Because of the constrained budget — the movie was shot non-union — Frankenheimer wasn't working with his A-team.

But while he may not quite be in the same league as Ken Adams, production designer Philip Harrison does an outstanding job — Alan's creepy bachelor pad is superb as is the Leo's peep show establishment.

And although Frankenheimer couldn't work with a star cinematographer like Gerry Fisher, he seized the opportunity to work with someone new and up and coming:

"I had seen... Das Boot, and the camerawork by Jost Vacano, and particularly the lighting, really impressed me." Following this, Vacano would go on to a distinguished career in Hollywood.

Beautifully shot, superbly scripted and acted, with a driving score by Gary Chang, 52 Pick Up is one of the best Elmore Leonard movies. Up there with Out of Sight, Get Shorty and Jackie Brown.

It also happens to feature a very nice cat.

(*For more details, please see Gerald Pratley's excellent book The Films of Frankenheimer, which was also the source of the quotes in this post.