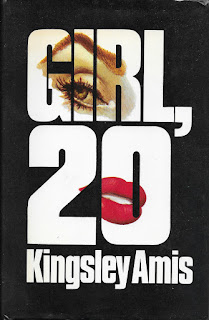 I was prompted to re-read this Kingsley Amis novel after hearing a really excellent BBC radio adaptation. And I'm very grateful for that impetus, because this is one of Amis's finest books.

Indeed, it turns out that many of the classic Kingsley Amis scenes that I so fondly remember and chuckle at over the years come from Girl, 20.

It is Amis at his funniest, which is high recommendation indeed. It is also often bigoted, blinkered and pointlessly bleak... which is about par for the course with our Kingsley.

That really excellent radio adaptation I mentioned was foolishly retitled All Free Now (this is the title of the last chapter of the book but... still... foolish).

But otherwise it was brilliantly written by Tony Bilbow. The next time it's available, I urge you to have a listen. In a couple of ways it even improves on the novel.

Now, on to that novel itself. Girl, 20 is the story of Roy Vandervane, sort of an André Previn figure — a serious conductor of classical musical who is also seriously trendy.

And, like Leonard Bernstein in the States, he is an avid supporter of left wing causes and the youth of the day (the day being the late 1960s or early 70s).

Roy has been married a couple of times, and indeed is still married, with three kids, two of them grown up. But he hardly bothers to conceal his constant affairs with other women.

These other women are increasingly young. The title refers to the fact that Roy is moving towards Girl, 20... but he has now actually overshot that destination and is currently with Sylvia, 17.

You might be inclined to think that Sylvia is some sort of victimised waif. Think again.

Referred to by Roy's wife as a "filthy little barbarian of a teenager," Sylvia is in fact a full blown monster and one of Amis's greatest comic creations.

The story is told from the point of view of Roy's old friend Douglas — affectionately known as Duggers — a music journalist.

Duggers disapproves of Roy's womanising in general, and of Sylvia in particular. He definitely doesn't see what Roy sees in her.

His descriptions of Sylvia's appearance are uniformly unappetising — looking like her "hair had been sprayed with glue while she stood in a wind tunnel" — but it's her behaviour and personality Duggers really takes issue with and the heart of the book consists of his attempts to get Roy to give up Sylvia.

Meanwhile, Roy is busy making use of Duggers as camouflage so that he can see Sylvia in public. This leads to some classic scenes in the novel. Every time Duggers is forced to meet Sylvia again my heart lifts with joy.

And although Sylvia is depicted as a hateful troglodyte, Amis is fair minded enough to give her a fantastically funny and cuttingly accurate tirade against Duggers and everything he stands for.

Calling him a "top-heavy red-haired four-eyes" is the least of it. She does such a spectacular job of demolishing Duggers that even he is impressed.

Sylvia also has some scathing things to say about Roy's grown up daughter ("you can put her through a mincing machine for all I care").

Sylvia may be a monster but she's clearly a monster that Amis loves and she is the occasion for his most ferocious comic genius.

And when Duggers gets to the bedroom with his own complicated but often passionate girlfriend she starts "undressing with the speed and conviction of someone about to go to the rescue of a swimmer in difficulties."

Kingsley Amis became more reactionary over the years as his brain softened with alcohol, but he could always write well and he often remained sharply, zanily, almost surreally funny.

And with Girl, 20 he's near the peak of his powers.

(Image credits: The main image is my scan of my own copy of the London Book Club hardcover, which I think has the most striking cover design of any edition. The art is by the mysterious J. Critchard who has absolutely no presence on the internet whatsoever. Except, I guess, for this footnote now. The other covers are from Good Reads. The title of the Spanish edition means "We all want to be young" — see? My Spanish lesson are paying off.)