The Passage by Justin Cronin 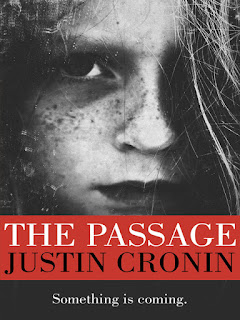 Nothing annoys me more than someone reviewing one of my books when they’ve only read a portion of it, then given up.


I would argue that you aren’t actually entitled to have an opinion about a book unless you’ve read the whole thing.

Well, I’m going to break my own rule and discuss Justin Cronin’s The Passage without having read the whole thing.

In fact, I’ve only read the first 200 pages, then flipped, skipped and scanned through the remaining 500-plus with increasing despair and frustration.

Let me start by saying a couple of things.

No one is more up for a giant blockbuster novel about an invasion of vampires, or zombies, or whatever the hell they are, destroying modern society. I was looking forward to immersing myself in an engrossing horror story.

And Justin Cronin can certainly write. In fact he can write brilliantly — at the level of sentences, paragraphs, and sequences which last a few pages.

What he can’t do is organise his massive sprawling narrative into a compelling and coherent whole.

Also, he has startlingly little ability to conjure up any suspense or excitement — a striking defect in a horror thriller.

The book begins very promisingly with an eerie sequence alluding to a massacred scientific expedition in the South American jungle where it has been sent to collect samples of vampire-like organisms.

This vivid vignette is cleverly conveyed in a series of increasingly brief emails from one of the scientists on the expedition. These emails are an ingenious method of summarising while conveying dramatically essential information — which is highly ironic, given that one of this novel’s fatal flaws is its general sprawl and lack of organisation.

There then ensues a lengthy section of about 200 pages, which does however feature one compelling subplot concerning the abduction of a child.

After this, we finally get to the big sequence in which the vampires break out of the government research facility where they are being held in a weapons development program (originality is not the strong point of this book).

Despite all the action and carnage, this major set piece falls oddly flat. And from this point onwards in the book, at least for this reader, it was all downhill.

The fearsome vampires withdraw to the shadows, so to speak, and spend the rest of the novel as pretty much an offstage presence. Cronin’s main concern, over hundreds and hundreds of pages, seems to be to depict a post apocalypse America now that the varmints have caused society to break down.

And sadly this depiction is pretty much the same as all the other ones in books and films and TV shows, from at least Earth Abides (a classic, incidentally) to The Hunger Games.

I should have suspected that The Passage might be a dud as soon as I saw the lengthy, pretentious (and, let's face it,  irrelevant) quotations which preface each section.

Even the two hundred pages I managed to read could have been easily and profitably cut in half by any competent editor. Cronin lards his narrative with endless flashbacks, back-story and biographical detail about his characters. Including characters who just aren’t central or crucial.

It is this lack of focus and priority which is so maddening.

Cronin simply doesn’t have a story to tell — or he has too many, and ends up telling none of them in a sufficiently satisfying manner.

In short, he can’t structure his narrative, and he is certainly no master of plots. (If he wanted to learn the rudiments of plotting, he could do a lot worse than read some of Philip MacDonald's taut mysteries. I'll be writing more about MacDonald here soon.)

If you want to read a modern vampire novel, then chose instead Richard Matheson’s classic I Am Legend. It also has the advantage of being only about one-sixth the length of Cronin’s brainchild.

And if you want a harrowing portrait of post apocalypse America, then I can think of none better than Cormac McCarthy’s The Road.

It is worth noting that both Matheson and McCarthy’s books are trim masterpieces of suspense and excitement which you can’t put down. In contrast, I found The Passage neither thrilling nor gripping.

I really regret the time I wasted reading Justin Cronin's The Passage, which is my main reason for issuing this warning. Maybe I can save you some lost hours.

Now I have plunged into J.G. Farrell’s The Singapore Grip,  — another big book, but this time a great novel by a great writer — as a kind of corrective, to try and purify my brain and reclaim that lost time.

(To avoid confusion, I should hasten to add that the Farrell book isn't a vampire novel or post apocalypse SF, or anything like that. It is a realsitic — though highly coloured and satirical — account of the fall of Singapore during the Second World War.)

Of course, The Passage is a big publishing success. Apparently tens of thousands of readers (including people I know and like — hi, Al!) admire and enjoy it. It has received massive advances and movie sales, etc etc.

However, by comparison with Farrell’s masterpiece, it dwindles quite into insignificance. At least in my humble opinion.

But then, don’t forget, I’m not entitled to that opinion… 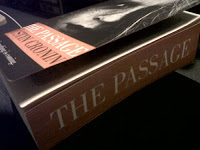 (Picture credits: The main image is taken from EM Castellan's blog, the first image of the groovy paperback edition of The Passage with the title printed on the page edges is from the University of Stirling's Gothic Imagination, the final image, also of that nifty edition, is from Tumblr, the mass market paperback is from  Graeme's Fantasy Book Review, Earth Abides is from Book Addiction, I Am Legend is from Horror Cannon, The Road is from The Quarterly Conversation  Lastly, Singapore Grip originates with a little known site called Wikipedia.)