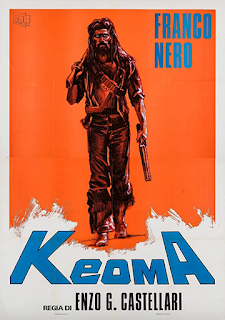 While I am a fan of Spaghetti Westerns I would by no means claim to be an expert.

However, I know enough about the genre to be astonished that I'd never heard of this fantastic movie.

It only came my way because it was recommended to me by my friend Matt West, with whom I am now doing a podcast about cult cinema.

Remind me to tell you some time about how I met Franco Nero, star of Keoma, to get an autograph for Matt. He's a huge fan of Nero and of this movie.

Now I know why. I've never seen a Spaghetti Western shot with such artistry.

And although the slow motion violence in Keoma is influenced by Sam Peckinpah, the film-maker who most comes to mind is Nicolas Roeg.

Roeg, at his best, created films of intoxicating beauty and palpable menace that toy with and perturb our perception of time.

Like Roeg, Keoma's Enzo Castellari interweaves the past and present. But, unlike Roeg and just about every other director, he doesn't do this through intercutting or flashbacks.

Instead he brings the past and present together by filming them in the same shot, often with continuous action and no cuts.

This requires real brilliance in its staging and I'm left in no doubt that there's genius at work here.

I'm assuming the guiding hand is director Castellari's, though his cinematographer Aiace Parolin must have made a considerable contribution.

And it doesn't hurt that the film's production designer is the great Carlo Simi, who worked with Sergio Leone on his own Spaghetti Westerns, from A Fistful of Dollars to Once Upon a Time in the West.

Even when the film isn't twining together different time periods, the fluidity and dexterity of the camerawork is amazing, moving smoothly from one beautifully composed dramatic tableau to another. 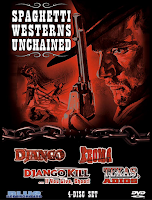 The story in a Spaghetti Western is seldom its strongest feature and that's true here. Keoma has a narrative that is confused and confusing, to say the least.

But Franco Nero is magnificent in the title role, with his pale blue eyes and ironic, introverted performance.

The film also features Woody Strode, who was so excellent in The Professionals and Once Upon a Time in the West, as Keoma's friend and ally George.

Once a slave, the Civil War has freed George. But he is now the town drunk.

Keoma calls him on this, telling him, "But you got your freedom." Only for George to reply, "I found out what it's worth. That's why I drink."

The movie has similarly profoundly cynical (and painfully truthful) things to say about the massacre of the Indians.

Keoma is a Native American himself, although his full beard makes him seem more like some kind of wild psychedelic hippie gunfighter.

The film has a long list of credited screenwriters, including Luigi Montefiori and Castellari himself.

The music is by the brothers Guido and Maurizio De Angelis, frequent collaborators with Castellari and Franco Nero. Indeed it is Nero who suggested they channel Leonard Cohen, of all people, for the memorable score to this unforgettable Western.

Keoma has a grim and unsatisfying ending, but it is still some kind of masterpiece. If you are interested in Spaghetti Westerns and, like me, had never heard of it, I urge you to seek it out.

(Image credits: All from IMDB.)