The Doors by Johnson and Stone 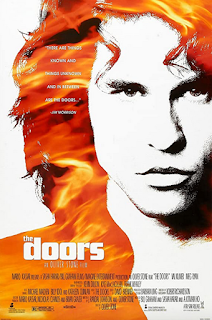 Although jazz is my true love, musically speaking, there's some rock music that was my first love, when I was growing up.

And among the bands I regarded so highly then — and still do now — are the Doors.

Oliver Stone is also an admirer. They have "always been my dream band" he says. He first heard their music when he was serving as a soldier in Vietnam.

On his return to the USA, Stone wrote a script entitled Break which featured the songs of the Doors and which he wanted Jim Morrison, their lead singer, to star in.

In fact, after Morrison died in 1971 — dead in his bathtub in Paris, like Marat — a copy of Stone's script was found among his belongings in his apartment.

Years later, Morrison's manager gave the script to Oliver Stone when Stone was in the midst of making a movie about the Doors.

Is it a success? It is a complete success. But whether it's a trip you want to go on is another matter...

The Doors is a powerfully dark story dealing with inherently dark material. 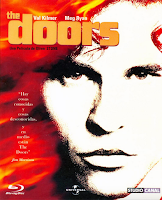 Although Stone would probably prefer the term Dionysian, with death and destruction as just a natural consequence, indeed a celebration, of the intensity of experience sought by the poet-voyager.

Jim Morrison certain was a poet-voyager. In the film he is superbly played by Val Kilmer. Kilmer looks great as Morrison, with a considerable resemblance to the real man.

And even when he doesn't look so much like Morrison he certainly looks like a rock god on the fast track to self destruction.

Kilmer can also sing, although he doesn't sound particularly like Morrison — except, oddly, in the scene where he's falling apart on his attempt to record 'Soft Parade'.

Stone says that as a performer Jim Morrison had an "Hitlerian ability... to make people go crazy... And the crowds became bigger and more demanding... And he had to feed them."

The movie Stone has created does full service to that relationship between Morrison and his audience, with superbly staged concerts, each with its own distinctive look and character. 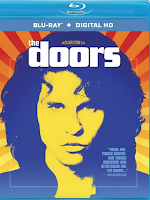 "I like excess. I like grandiosity," says Stone "... huge, huge set pieces." Set pieces like the fantastic concert sequence shot at the Pulgas Water Temple in San Mateo, California.

"We had no problem finding extras who could strip and dance naked. Hundreds volunteered."

After Kilmer, the standout member of the cast is Meg Ryan, startlingly cast against type as Pamela Courson, Morrison's long term girlfriend.

Courson was a complex and elusive character. "The only thing everyone agreed on was that she was a redhead," says Ryan.

The film is beautifully shot by cinematographer Robert Richardson who does full justice to the hallucinatory nature of the material. "I hadn't tripped in some time," he said, "and when we scouted locations I took some mushrooms..." 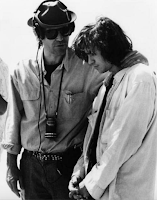 The script is by Stone based on an early version by J. Randal Johnson.

And the music is, of course, by the Doors.

If you're a fan of the Doors then you should definitely see this movie.

If you're not, then I suggest you ignore the movie and instead go and listen to their album LA Woman.

It's their last record, and it's a masterpiece.

As Stone says of Morrison, "He turned out one of his best albums right at the end...With tremendous decadence comes tremendous creativity."

(The quotes in this post are from the commentary track for The Doors DVD, from a terrific coffee table book on Stone, and from James Riordan's biography of Stone, which was particularly useful.)