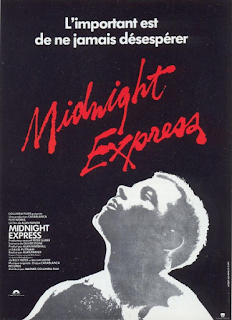 Writing the screenplay for Platoon in 1976 was a major turning point in Oliver Stone's life and career. No one wanted to make such a raw and realistic film about the war in Vietnam... But everyone recognised the brilliance of the writing.

And soon Stone found himself hired by Peter Guber at Columbia Pictures to create a screenplay from a book called Midnight Express.

Written by Billy Hayes and William Hoffer, Midnight Express is the true story of how Hayes was busted for trying to smuggle hashish out of Turkey and how he was incarcerated and brutalised in a Turkish prison, before finally escaping.

Oliver Stone was the perfect writer to adapt this tale for the screen.

"When I interviewed Billy Hayes I conflated him with myself because I'd been busted and I hated the authorities... I conflated two things: Billy's story, and my anger at being busted in San Diego for two ounces of grass... facing federal smuggling charges of five to twenty years..."

Peter Guber at Columbia also decided that the ideal director for Midnight Express would be the British Alan Parker.

Parker liked the book and signed up to do the movie with his friend and ally David Puttnam as the producer.

The only problem was this crazy, unknown American called Oliver Stone who'd been hired to write the script. "Guber... sort of forced me on Puttnam and Parker, who were sceptical," Stone recalls.

"I think they figured that... they'd bring me over to London and run through a quick draft, and then get rid of me."

Stone is completely correct in this. In his commentary track for the Blu-ray on Midnight Express, Alan Parker confirms that the idea was that out of courtesy to Columbia they would let Stone deliver a screenplay and then Parker would take over and the real writing would begin...

"We would put up with this strange individual and then he would go away and I would write the screenplay," says Parker.

However... "When he delivered the first draft it was so good we were kind of in shock, really. Because though we weren't enamoured with Oliver... he wrote a very excellent first draft."

Stone, for his part, says, "I must say that Parker, though he was cold to me the whole time, maintained the integrity of the script. Alan and David Puttnam were put under a great deal of pressure to tone the film down, but they held out. They fought to shoot my screenplay."

And the result was a powerful, harrowing, beautifully made film which still stands up today, over 40 years later.

Alan Parker did a magnificent job of directing the film and, as indicated, Stone's screenplay is outstanding.

Mention must also be made of the excellent second unit photography in Turkey, directed by Hugh Hudson, and the outstanding cast — chiefly Brad Davis as Billy and John Hurt and Randy Quaid as his friends in prison, Max and Jimmy.

It's very strange that Brad Davis never went on to achieve considerable stature in the movies, unlike Hurt and Quaid.

And unlike Oliver Stone.

Midnight Express was both a commercial and critical hit. And Stone's screenplay was recognised as a major factor in its success.

He won a Golden Globe for the screenplay, although the award ceremony was something of a fiasco: "That night I was stoned out of my head on Quaaludes and coke... I made this long, obfuscating speech attacking the drug laws...I was being hissed and booed off the stage."

But he was wrong. In 1979 Oliver Stone won the Oscar for Midnight Express and his career as a film maker was well and truly under way.

(The quotes for this post are from two sources: James Riordan's excellent biography of Oliver Stone. And a superb coffee table book about Stone that is responsible for sending me on this deep dive into his work.)