Memory played me false with Platoon. 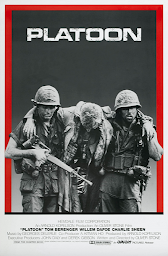 I recalled this movie as being overly sentimental.

But in fact it's notably devoid of sentiment. The only trace is perhaps in the final voice-over of Chris (Charlie Sheen) reading his letter to his grandmother.

And even there it's not so much sentiment as a hint of grandiosity. And this is far from unearned.

Because Platoon is a remarkable film. It grabbed me immediately with its sense of reality, its virtuoso photography and its sure sense of situation

Those characters are the naive young new arrival Chris — the proxy for Oliver Stone — and the two sergeants who represent the moral extremes of Stone's experience in Vietnam.

The evil Barnes played by Tom Berenger, a bull of a man with a terrifying scar on his face. ("A work of genius by Gordon Smith," said Stone of this makeup.)

And the good Elias, played by Willem Dafoe as a wickedly grinning serpent of a saint.

On the rewarding commentary track for this DVD, Stone astutely points out that until he cast these actors in these roles, Berenger had always been the good guy in the movies and Dafoe the evil one.

Both deliver expert performances. And Charlie Sheen is surprisingly good.

As with Tom Cruise in Born on the Fourth of July, Oliver Stone elicits unexpected conviction and authenticity from his leading man.

Elsewhere, Kevin Dillon makes an indelible impression as an amiably murderous redneck psychopath with the utterly wonderful name of Bunny...

And Mark Moses is memorable as the equally misnamed Lieutenant Wolfe, the feeble and ineffectual weasel of a commanding officer.

As was Georges Delerue who wrote the music. Delerue is a g

enius of a film composer, but the tune everyone remembers from this movie is Samuel Barber's Adagio.

The production design, which has so much to do with the look and impact of a film, is by Bruno Rubeo, another Stone stalwart, who also did memorable work on Proof of Life and Dolores Claiborne.

The death of Elias — which is immortalised on most of the film posters — pushes this movie into its final, lethal phase.

Chris and the other pot heads who hung out with the weed toking Elias are drinking to his memory in their bunker, hoping he is in heaven, "drunk as a monkey and smoking shit..."

When Barnes, Elias's murder, comes into the bunker and offers them a chance to kill him.

It's a scene of real dramatic stature and begins the countdown to the climax of the film — a ferocious and chaotic episode of combat that carries a powerful sense of reality.

Platoon is a great movie. I'm delighted that I rewatched it and had my opinion of it elevated.

I did so because I am enjoying an Oliver Stone retrospective, inspired by this superb book. So there will be more to come.

(Image credits: all images from IMDB.)