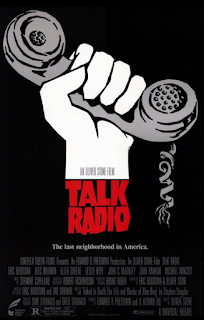 After making Wall Street and while he was waiting for Tom Cruise to become available for Born on the Fourth of July, Oliver Stone squeezed in a quick little low budget picture.

It was shot in Dallas, where much of the filming for Born on the Fourth of July would take place. This would enable Stone to get to know the place and the local film crews and facilities.

It would also enable him and his cinematographer Robert Richardson to get used to shooting in confined spaces, something they were planning to do a lot in Born, where Tom Cruise was confined to a wheelchair.

Talk Radio was the story of a disc jockey, so a large portion of the movie is spent up close with him bent over his microphone in the radio station.

This project also, to be candid, allowed Oliver Stone to satisfy his hunger for film making. Stone liked working fast and cheap. It was what he had done with his first two pictures, Salvador and Platoon.

Wall Street had been an entirely different beast. A big studio movie. Born on the Fourth of July would be another one.

But in the nine months between the one ending and the other beginning, Stone returned to his guerrilla film making roots.

Talk Radio was based on a stage play written by Eric Bogossian in which he'd also played the lead role. Bogossian was again the lead in the movie. The play concerned a controversial DJ, what we'd now call a shock jock, but which then was something relatively new on the airwaves, and it took place during one program on one night.

Stone expanded the story in several ways. Most importantly he combined it with the true story of disc jockey Alan Berg in Denver who'd been murdered by white supremacists.

Although the film is firmly centred on the DJ, here called Barry Champlain, it also crucially deals with his callers, mostly disembodied voices — although one of them, Kent, a heavy metal prankster unforgettably played by Michael Wincott, turns up at the radio station.

"Those callers are the costars of the movie, and they're invisible," says Oliver Stone.* And they make an indelible impression in the course of the film, though not quite as indelible as Barry's assassination at the end, in a rooftop carpark. 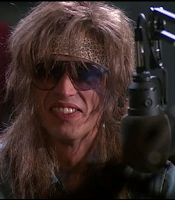 The camera floats above his body, like his spirit rising upwards, then pans across the night time skyscrapers of Dallas in a masterful shot, overlaid with a collage of voices, as conflicted about Barry in his death as they were in his life. It's one of Stone's finest moments.

(*My deep dive into the films of Oliver Stone was prompted by a most compelling book, which was the source of this quote.)