The Stories of Katherine Mansfield 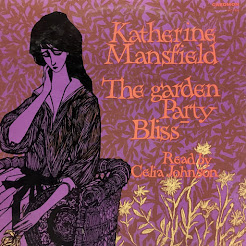 Holy crow. You can normally depend on my blog posts to deal with novels about a desperate loner on the run from the police, framed for the murder of a cop...

Or an army of mutant creatures taken into battle against invading aliens.

Or, at the very least, a movie about a skyscraper on fire.

But this week I'd like to alert you to the short stories of Katherine Mansfield. And there's not a framed fugitive, mutant army or burning skyscraper in sight.

Mansfield was a New Zealander who moved to England as a teenager in 1905 and spent most of her remaining short life there or on the Continent.

Short indeed. She only lived to be 34, and it was a life so packed with tragedy and misfortune that you may want to skip reading about it.

But it was also packed with writing, and she was the creator of a body of genuinely brilliant and indelible short stories.

I was aware of Mansfield, but had never read her work. All that changed when I heard some excellent recent dramatisations on BBC Radio, in an impressive two week celebration of her stories.

These included Miss Brill, a concise and deft account of a spinster whose defensive illusions are destroyed by a chance remark.

And the heart-rending The Doll's House, about the brutality of snobbery and class

These, and others equally powerful, got me seeking out a book by Katherine Mansfield and digging deeper into the BBC's archives...

Where I found The Garden Party, another lyrical but ruthless dissection of class distinction and the incredible The Fly.

The Fly is the story of a wealthy businessman whose life has been rendered meaningless by the death of his son in the First World War. He assuages his pain through a tiny — but heartbreaking — act of cruelty.

The Fly and The Garden Party seem to be permanently available for listening online.

As do two anthologies, the first featuring stories including Bliss, an elegant tale of rapture and betrayal.

ond including Daughters of the Late Colonel, about what happens when you devote your life to a controlling invalid of a parent — and he suddenly drops dead.

On the other hand, Miss Brill and The Doll's House may well no longer be available by the time you read this, but that hardly matters because, l

ike me, you can get hold of a book by Katherine Mansfield and read these stories.

Mansfield's prose is terse, sharp and funny. Her descriptions are forceful, such as the "dark, oily spinach green" of the eponymous doll's house; and almost dreamlike at times, like the "hot, bright station slipping away" as a train pulls out on a hot summer morning.

And her characters are fabulous, often hilarious and drawn in swift strokes, like Kate, the "proud young" servant of the Colonel's daughters, who sees herself as an "enchanted princess" and the sisters as two "old tabbies".

Mansfield's poetic characterisations can cut deep. Like the young husband in Marriage à la Mode who loves his wife so much it literally hurts.

He thinks of her as a rose bush "after a shower of rain... petal-soft, sparkling and cool."

Unfortunately for him, his wife is pretentious and vain, running around with a crowd of artistic phonies and spongers.

When he writes her a deeply felt love letter, she reads it to them and they all laugh themselves sick.

Katherine Mansfield was an exceptional talent, cut short by a stroke of fate as cruel and underserved as anything in her stories.

And those stories are well worth seeking out.

(Image credits: The beautiful main illustration, by the great Leo and Diane Dillon, is of the Caedmon LP of reading of Mansfield's stories and is from Discogs.The portrait by Anne Estelle Rice is from Bookanista. The beautiful floral cover for The Garden Party is designed by Holly Dunn, from her own website.

The Oxford Bookworms edition with the seated lady is from Rakuten Kobo. The Oxford Bookworms edition with the standing lady is from Amazon. The lovely and elegant Selected Stories cover is from Mark My Books. The classic orange Penguin if from Literature Cambridge. The floral cover Penguin English Library edition is from Penguin. The Penguin Modern Classic with the black and white cover illustation by Heather Standring is from Pinterest. The lady-in-the-hat Penguin edition with the grey stripe at the bottom is from Books of Gold.)