The Removers by Donald Hamilton 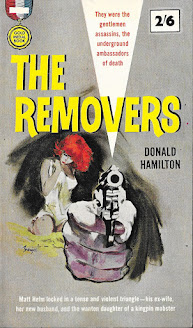 Donald Hamilton is rising swiftly in my estimation. Soaring, in fact.

I have previously written about the first and second novels in his Matt Helm series.

These are nominally spy novels, but essentially they're hardboiled adventure thrillers.

Matt Helm is the American equivalent of James Bond, given license by his government to kill the enemies of the state, receiving orders from the head of a shadowy government department.

But beyond that he is an entirely different creature from Bond. A blue-collar guy who drives a pickup truck, Helm may travel to exotic lo

cations like 007 (as he did to Sweden in The Wrecking Crew) but he also emphatically has a home turf and roots in the way that Bond doesn't.

Matt Helm comes from the American Southwest, and when he's writing about that milieu, Hamilton is particularly acute and effective.

Helm also has a domestic background — a wife and kids — in the way that James Bond never did.

In fact, in my post about the second Helm novel I was bemoaning the fact that Helm's divorce meant this family background was history. I wrote, rather sententiously, "domestic normality to contrast with bloodthirsty action in a thriller provides an interesting dynamic and an ideal counterpoint."

I spoke too soon. Here we are, in the very next book in the series, and the entire plot is triggered by Helm's wife Beth and their kids, who are in jeopardy. A rather sardonic form of jeopardy...

Because, by a delectable stroke of irony, after dumping and divorcing Matt due to his violent history, it turns out Beth's new husband is just as bad.

Ostensibly a respectable rancher with a large spread outside Reno, Lawrence Logan is revealed to actually be the murderous ex-enforcer for a high ranking Mafia thug.

When his past catches up with him, and therefore her and the kids, Beth turns to Matt Helm for help.

In my last post I also made a slightly snide comment that "Hamilton isn't quite in the class of John D. MacDonald or Charles Williams."

I fear I'm going to have to eat my words concerning this, too. The writing in The Removers is simply terrific. The only false note is Logan's rather fake British accent. (But then, Logan himself is supposed to be something of a fake.)

And the characters are just wonderful, and enchantingly described.

I am thinking in particular of an Afghan hound called Sheik, looking "rather like a greyhound with shaggy cowboy chaps on. It had a long, narrow inbred head and big pleading brown eyes... standing erect on its hind legs... as tall as the girl on the other end of the leash."

The girl on the other end of the leash is Moira Fredericks, the daughter of the high ranking Mafia thug mentioned earlier.

But despite this, or more likely because of it, Moira is one of the good guys.


She has "disturbing sea green eyes" and a mildly tragic backstory in New York where she "was about ready to jump off one of the bridges, it was just a matter of deciding which on

e, they've got plenty to choose from in that damn town."

She was saved by adopting Sheik, "the wildest, meanest, most difficult dog" they had at a kennel she happened to drive past.

Muriel is perceptive, and a great, great character. She certainly has Matt Helm's number, assessing him as "Something kind of special, in a a gruesome sort of way."

Moira and Sheik are the best things in the book. And the scene where Moira and Matt drive out into the Nevada wilderness, letting Sheik off the leash and allowing him to hunt, may well be the most memorable sequence:

transition from the gaudy night life of Reno to the dark, silent desert nearby was almost shocking... an arid landscape that might have been the surface of the moon... vaguely illuminated by the threat of dawn in the east."

When they let him out of the car, Sheik stretches, "his long body flexed like Robin Hood's bow." Soon the dog is running "faster than any deer ever dreamed of." And he's hardly got started...

"Wait till he cuts in the afterburners," says Moira, wryly alluding to a fuel injection system in a jet engine. And the "lean grey dog, running sile

ntly, its long fur rippling with the wind of its own motion" is like "pale death flowing over the ground."

Of course, this book isn't about Moira Fredericks and her Afghan hound. They're subsidiary characters.

The real thrust of the story is a neat intertwining of three plot strands — the danger faced by Helm's family, the gangster past of Beth's new husband, and espionage taking place at the nuclear weapons research facilities in the Nevada desert.

It's a story that moves fast and delivers elegant, logical surprises. It's supremel

y well told, with vignettes of savagely violent action and heartbreaking tragedy — it actually made me cry at one point, sitting in my garden holding a vintage paperback in one hand and rubbing my loyal cat under the chin with the other.

And Beth comes out of the shadow of being merely Helm's ex-wife and emerges as something of an extraordinary character in her own right.

But this novel belongs to the sardonic green-eyed Moira, and Sheik, one of the most memorable animals in fiction. When the plot requires the two of them to be side-lined, and moves on to other matters, the book never quite recovers.

Nevertheless, The Removers is easily the best of the Matt Helm adventures I've read so far. It's ironic that such a terrific book has such an anodyne title. (Whereas The Wrecking Crew is a great title applied to an okay book.)

This is an unforgettable novel. And as for Donald Hamilton's stature as a writer, all bets are off.

He may well prove to be up there with the best of them.

(Image credits: The front and back covers of the British Frederick Muller 2/6 version and the US Gold Medal 40c edition are scanned from my own — now treasured — copies. The Titan, Audible and Finnish and Greek editions are from Good Reads. The rest, all Fawcett Gold Medal variants, are from the extremely useful Good Reader Gone Bad.)