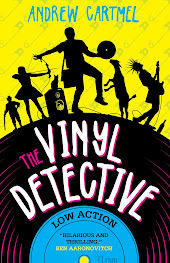 My fifth Vinyl Detective novel has just been published and I hope you'll permit me the indulgence of discussing — and of course promoting — it here.

I'd like to reassure any prospective readers, however, that I won't be giving away any spoilers. You can read this post before you read the book, and no damage will be done...

Each of the Vinyl Detective stories tends to focus on a different genre of music, and for this excursion, Low Action, it's punk rock.

The novels in the series often also involve a search for a rare recording — which in some cases mean one that was suppressed.

It was my friend the composer Joe Kraemer who came up with the sardonic suggestion that the rare record in this book had been pulled from the shelves because the playing on it was too good for a punk LP.

I loved that, added it to the plot, and duly set about my research and preparation for the story. The first step was to come up with a suitable name for the imaginary (all girl) punk band in the book.

Here's a selection of names that didn't make the cut: The Chuff, The Bints, The Scrubbers, The Kippers, The Duff, The Birds, The Muff, Bimbo Eruption, Bad Kissing, Unauthorised Nudity, Rough Garden and Lovely Furry Killing Machines — LFKM, a name that signified cats!

inspired by a tweet from @LogBookGuy was far and away my favourite — thank you, @LogBookGuy! And I may well use it one day. But for plot reasons I settled on something else for the protagonists of this novel.

Another friend, the novelist Ben Aaronovitch, requested that one of the characters from his own novels make an appearance in my book, since he wanted to establish a backstory for that character as a punk. I was happy to oblige.

My research on the punk rock era proved invaluable. Not least because I discovered the importance of fanzines to the scene — and that gave me a character I hadn't had before, one who wrote and published (althou

gh publish is far too grand a word) an amateur magazine about the band in the book.

The other big influence on this novel was, oddly enough, Agatha Christie. The Vinyl Detective stories sometimes reflect my admiration for other crime writers.

before how in the third book in the series, Victory Disc, I wanted to try my hand at the sort of unbearable, claustrophobic suspense that Cornell Woolrich was such a master of.

This time, as I say, it was Agatha Christie. In particular the brilliant way she would set up a whole panel of suspects for the role of murderer — all of whom were equally plausible as being innocent or guilty.

I hope I've had a fraction of the great Christie's success in pulling the wool over the eyes of the readers.

And I hope you'll check the book out (literally check it out, of a library, if you like) and that you will enjoy it.

Oh, and as a special bonus and Easter egg, here is a little portion of the book that was cut from the final version: 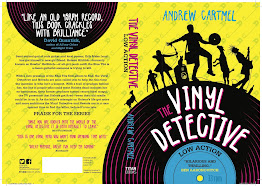 “Make it look like an accident?” said Nevada. There was the deadly serious promise of mayhem in in her voice and my eyes immediately went to the large and bulbous glass sugar shaker on the table in front of us, because it looked like Monika was about half a second away from getting this smashed into her face.

(Image credits: All are from my own collection, the Vinyl Detective covers from Titan Books and the copy of Peril at End House with the beautiful Tom Adams cover and the vintage Pocket Book of The Bride Wore Black with the equally lovely H. Lawrence Hoffman art are both scanned from the ones in my library.)