Skyfall: Bond Beyond All Expectaion

In Skyfall Albert Finney plays the only grizzled old gamekeeper in the world who doesn’t know the difference between a rifle and a shotgun. 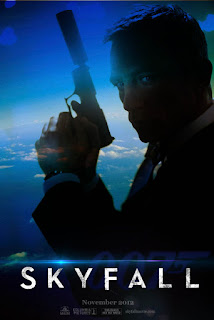 But now I’ve got that annoying solecism off my chest, I have to tell you that Skyfall is a masterpiece.

If you have a shred of interest in Bond movies, you should drop everything and go and see it right now.

Skyfall is written by the admirable team of Neal Purvis and Robert Wade who have been doing excellent work on the franchise for many years. (They also attended my alma mater, the University of Kent at Canterbury -- hi, guys.)

As has become traditional, the Purvis & Wade script was then rewritten by another hired gun, presumably to provide some additional fresh ideas.

On the previous Daniel Craig Bonds, this third writer was Paul Haggis. This time around it’s John Logan, who wrote Gladiator.

And James Bond was, of course, created by the great Ian Fleming.

I don’t know how to apportion credit for all the first-rate material in the Skyfall, but suffice to say the writers got it right.

Not just the writers. The cinematography is stunning. And Sam Mendes does a great job of directing.

The Thomas Newman music is the best Bond score in years; he’s new to the franchise and is on board because he’s composed all of Mendes’ films (perhaps most memorably American Beauty).

And the cast is splendid. Albert Finney is splendid – it certainly wasn’t his fault about the rifle dialogue. I suspect it wasn’t the writers’ fault, either. What probably happened was that the script specified a rifle, and then somebody decided a double barrelled shotgun was sexier and changed the prop without adjusting the script.

The problem is, both the characters in the shotgun scene are weapons experts. And in a Bond story, guns matter.

Other problems with the film? Well, in the initial motorcycle chase the bad guy looks rather too much like Bond (short cropped fair hair) causing confusion about who’s who.

I’m also not convinced about the effects of cyanide as discussed in the film (research continues on this topic).

And most of all, I’m not happy with the way Bond stalks a sniper and politely waits until the bad guy has murdered his prey before taking action against him.

But, really, none of that matters at all. Skyfall is a masterpiece.

It has a brilliant script.

It has a strikingly hot Bond girl (Naomie Harris, take a bow).

It has a memorable villain, something notably lacking from Quantum of Solace, this time in the shape of Javier Bardem (Javier, I forgive you for Before Night Falls).

And, praise the gods of espionage thrillers, it has a magnificent climactic action sequence. (Very unusually for a Bond film, moving into Straw Dogs territory.)

This last feature was notably lacking from Quantum of Solace (exploding modular hotel, yawn) and most recent Bonds — and indeed most recent American action movies.

The trend in big screen thrillers has been to open with a slam bang, jaw dropping set piece and then gradually decline to a weak ending (for a recent example, check out the execrable Expendables 2).

The terrific action conclusion was beginning to look like a lost art.

Not any more. Skyfall delivers beyond all expectation.

I can’t quite believe I’m saying this, but it’s not just the best Bond movie of the Daniel Craig era…

It’s the best Bond movie of all time. 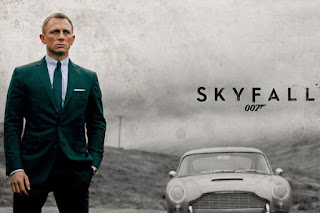