A View to a Kill by Fleming, Maibaum and Wilson 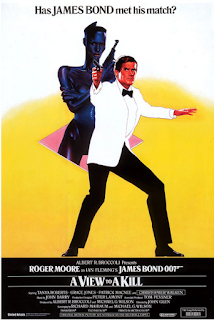 I've always been a follower of James Bond, both in print and on screen.

I'm writing about A View to a Kill this week because I'm discussing this film with Matt in our podcast.

And, to be honest, I nominated this particular 007 screen outing, the last to star Roger Moore, because I remembered it as being the worst in the series.

But I hadn't seen the film again since I first caught it on the big screen in Leicester Square in 1995 and it turns out I was considerably too harsh on it.

James Bond was, of course, created by novelist Ian Fleming. Fleming also posthumously contributed the title to this movie — a variant on his short story 'From a View to a Kill'.

Other than that, it is entirely the work of two screenwriters, the veteran Richard Maibaum who had been scripting Bond since the very first movie, Dr No (1962), and Richard G. Wilson, who had been Maibaum's co-writer since For Your Eyes Only (1981).

This includes a fight at the top of the Eiffel Tower and a car chase through Paris, but it's still dull and undistinguished.

When this far from thoroughbred section finally reaches its finish line, the movie relocates to California, around San Francisco.

And it picks up wonderfully, mostly because Stacey Sutton (Tanya Roberts of Sheena fame) is a first rate Bond girl.

For a start, she's intelligent and highly educated, a geologist who analyses earth tremors on her computer. Which is lucky because Zorin's sinister scheme is, effectively, mass murder by earthquake through fracking, with Silicon Valley the main target. 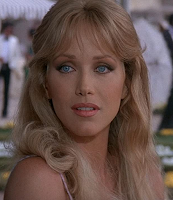 This plot has the effect of rendering A View to a Kill, so antiquated in other respects, strangely up to date. And Stacey has some sharp lines — "If it happened at the peak of the spring tide for maximum effect..."

This is excellent and indicates both that she knows her stuff and that the writers did their research.

Stacey also has a cat. (Mercifully Maibaum and Wilson refrain from pussy jokes... even though that does seem to be the cat's name.)

And when Bond rescues Stacey from home-invasion and intimidation by Zorin's thugs, instead of trying to immediately and remorsely bed her afterwards, he sees her safely off to sleep and then watches over the house.The next morning we find Bond dozing in a rocking chair with both a pump action shotgun and the cat in his lap — a genuinely appealing figure.

Pitted against him, Walken as Zorin is a fun villain, the product of Nazi breeding science and a bloodthirsty maniac, he channels Robert De Niro when he goes full murderous psychopath. 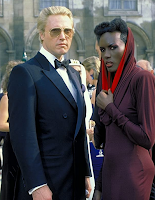 And, at the end, as Zorin slips to his doom from the Golden Gate Bridge, he gives a little self deprecating laugh.

And, ultimately, Bond's ally when Zorin betrays her: "I thought that creep loved me."

A View to a Kill is directed by John Glen, who began with Bond as a film editor on On Her Majesty's Secret Service, and has alluring costumes by Emma Porteous.

It also possesses a major asset in the form of John Barry's music. After nearly twenty years writing soundtracks for Bond movies it wouldn't be surprising if Barry had been running out of steam — and ideas — at this point.

But his score for A View to a Kill is terrifically strong and memorable.

The main theme gives a catchy melody to the song 'Dance into the Fire', which Duran Duran fail to do justice to, and provides excellent thematic material throughout the film.

A View to a Kill isn't all good, but the bits that are, are surprisingly first rate.

I feel a little bit bad about my previous judgement...

This movie clearly is far from being the worst Bond...

To find out what that is, I would have to rewatch the whole series.