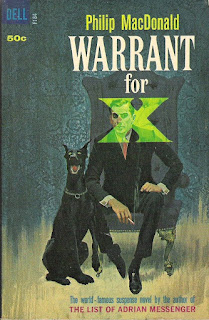 The thriller and mystery writer Philip MacDonald continues to fascinate. He is by no means perfect. There is the wearying tendency to spell dialogue (particularly of the lower orders) phonetically.

And there is a certain perfunctory aspect to the romantic interest in X v Rex — but, actually, that isn’t quite doing justice to how vivid and engaging Jane Frensham actually is. (Daughter of police commissioner Sir Hector Frensham, of course.)

The brightly coloured vividness of Philip MacDonald’s writing reminds me of Cornell Woolrich at his best. Luckily, though, he has none of Woolrich’s clumsiness.

MacDonald’s prose is always detached, elegant, amused. And it can pour on the suspense and thrills with devastating skill.

You also never know who he is going to bump off. MacDonald will introduce a character who is vivid, memorable and beautifully three dimensional — fully alive in the reader’s mind.
And then he’s dead a page later.

So you never know if you’re meeting someone who is joining the narrative for the long haul, or who is imminently for the chop.

And if it’s the latter case, MacDonald’s technique is a much superior variation on the weary cliché of the guy who has just got married or is about to have a kid or is nearing the end of a dangerous tour of duty — an inferior writer’s cheap attempt to awaken our sympathy before perfunctorily dispatching a character.

By contrast, Philip MacDonald brings them so vividly to life we are sorry to see them go.

Hmm. Any other reservations about X vs Rex by ‘Martin Porlock’? Perhaps a too pronounced tendency for madmen to let loose eerie bubbling laughs…

But maybe MacDonald was letting his hair down a little here, writing as he was under a pseudonym. 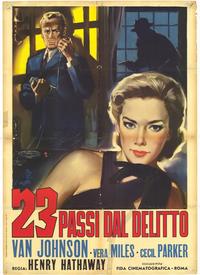 And anyway these are minor quibbles stacked up against the writer’s virtues. I love the concision of his prose:

A visitor came and went.

And I revel in the uninhibited demotic colour which makes his stuff seem so surprising modern. Like the reference to the killer 'strutting his stuff’ and the enquiry by the police about a suspect, 'had Revel any particular piece of skirt?'

I’m looking forward keenly to reading Rynox next and will report back in due course.

And I’m excited to have just obtained a copy of Warrant for X with a great Robert McGinnis cover.

This 1938 novel is not, as some parts of the internet may inform you, an alternative title for 1933's  X versus Rex. It was published under MacDonald's own name and was filmed in the 1950s, well after he'd relocated to Hollywood, as 23 Paces to Baker Street, which is quite a highly regarded thriller.

I must investigate that.

I’ll tell you more about Philip MacDonald as soon as I've read some more.

(The image of Warrant for X is from the copy I bought on eBay, as is X v Rex. The brilliant Mystery at Friar's Pardon cover is from an intriguing site called Pretty Sinister Books. So many fascinating blogs out there... The Italian poster for 23 Paces from Baker Street (in this case, 23 Paces From Crime) is located at the Movie Poster Shop.)