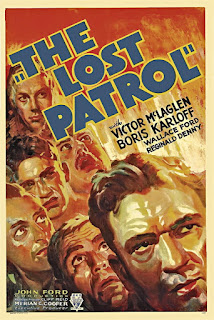 I’ve discovered a rather amazing book by Philip MacDonald.

And it’s all thanks to an insightful and informative article by Kim Newman in the film magazine Sight & Sound.

In the July 2012 issue on page 28, in a piece on Ridley Scott’s Prometheus, Kim discusses the basic scenario of Alien, Aliens, Predator and literally hundreds of other films — “western, war, action, adventure, jungle, horror and science fiction” and suggests that we should call them ‘lost patrol’ films.

Because “The plot about a unit separated from a home base  — picked off one by one by a mostly unseen enemy and riven by tensions within the group that make one or more of the men as much a danger as the external opponent — goes back to Philip MacDonald’s 1927 novel Patrol set in Mesopotamia (yes, modern day Iraq) during World War I and drawn from the author’s personal experiences.”

Well, as soon as I read that, I had to get hold of a copy of the Lost Patrol. Which was easier said than done. Because, for such an influential classic, the book is startlingly scarce and difficult to find. It hasn’t been reprinted for decades.

After months of searching I finally came up with a decent copy on eBay at a reasonable price. It’s a nice little pocket sized hardcover, a rather sleazy cheap reprint of the day — a movie tie-in, in fact — complete with ads at the front and back (self improvement correspondence courses and snake-oil horoscope astrology).

I’ve only started reading it, but I’m already gripped and impressed. Here’s a quote from the very first page:

“I don’t exactly know,” said the Sergeant half aloud, “what to do with him.”
The head which rested on his knee shifted a little and a froth of blood bubbled suddenly at the corners of the mouth…
The Corporal who stood beside him knelt, peering at the face on the Sergeant’s knee. “That’s that!” he said…
“Yes. Pity. Decent boy in some ways. No soldier.” He gently eased down the body until it lay flat upon the sand.

What a great opening!

It gets better. We learn that the dead soldier, rather cruelly nicknamed ‘Muriel’ was in fact their commanding officer. And the incompetence of this inexperienced young toff has left the patrol stuck in a desperate and dangerous situation.

There are several important things to note about MacDonald’s writing, which are very obvious even on this brief acquaintance.

It’s amazingly modern. There is no mucking about. No lengthy scene setting or enumeration of character. We are straight into the story, by way of dialogue, in a terse clear prose which is hardboiled and stripped down in the manner of Hemingway and Hammett — yet written at a time when those writers were themselves just getting started. 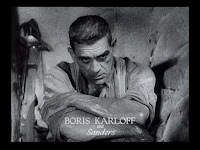 And it’s intensely cinematic. Effectively the story starts with a close up of the dying officer.

It’s hardly surprising that the book was filmed twice, shortly after it was published and has been constantly remade, officially and unofficially, ever since.

Nor is it surprising that Philip MacDonald ended up in Hollywood. Indeed, I was already familiar with his writing from The List of Adrian Messenger, a taut and cynical little thriller which was turned into a film by John Huston.

It’s always dangerous to make judgements on a book before you finished reading it so I’ll update this post if The Lost Patrol takes a nose dive and turns out to be a major disappointment.

But I rather suspect it won’t.

Thanks for the tip, Kim.

(Picture credits:  the Penguin cover is from an excellent Penguin blog Travellin' Penguin. The Literary Press  cover shot is from Amazon, courtesy of  M. Welfare. The Karloff pic is from the Land of Cerpts and Honey blog. The group shot pic is from the John Ford blog  The Skeins.  The movie poster is from Share TV.)
Posted by Andrew Cartmel at 12:09